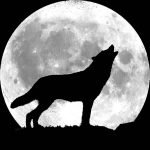 I think it would be fair to say that everyone with access to electronic media is familiar with the sound of a wolf howling. We can all visualise the power and impact of a wolf standing silhouetted against the full moon and giving voice to a long mournful ‘hooowwwwllll’. However, have you ever stopped to wonder what the wolf is saying?

Some very clever people have studied wolf vocalizations and have developed very interesting commentary on why a wolf howls and what it could mean. 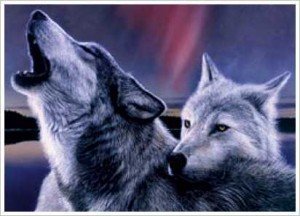 A wolf’s life centres around the pack it belongs to. Social cohesion within the pack is thought to be created and strengthened through howling. It is a well established line of thinking that identifies the wolf howl as a way of physically locating pack-mates and keeping the pack together as they wander across great geographical distances in search of their prey. During these wanderings, a wolf may become separated from the pack.

Wolf pups seem to howl indiscriminately and there seems to be some latitude given to them by the adult members of the pack.

This can lead to the pup being fed as the returning adult may be bringing food and will howl to alert the pack it is returning. However, as a pup reaches about six months of age it has begun to determine with a great deal of accuracy to whom, when and where it should engage in howling.

This is the leader of the pack or the dominant (Alpha) male. When approached by a strange wolf or by a challenger, the Alpha’s howl can become lower in pitch indicating aggression. This tone will become coarser as the stranger/challenger approaches closer.

A pack will howl in a chorus and use tonal modulation. The changes in the pitch of the howls makes it difficult to single out one individual wolf from the rest of the pack, especially if the pack is howling together. This rapid tonal shift and combined howling has been determined to make a pair of wolves sound like many more and is referred to as the Beau Geste Effect.

This effect has the result of making it hard to determine the size of a pack and is both a defence mechanism and a potentially lethal means of disguising numbers in a rival pack.

Below are some videos which cover a wide variety of howls made by wolves.

Please play them and enjoy.

To all my visitors who appreciate the articles about this noble animal and would like to see this site continue to develop, please leave a donation by using the ‘support the wolf’ button in the right hand column.

Native american the song of wolf